I’d like to start off by saying, I am NOT big on sports what so ever. Football, I can tolerate, somewhat but ask me if I understand it. Golf and Baseball are both boring to me. I’d rather watch paint dry. Basketball is the only sport that I could actually pay attention to. Hot guys, dribbling a basketball up and down the court? Uh, yes please! While in Miami, I went to my first professional game, Miami Heat vs the Philadelphia 76ers. Let me tell you it was nothing like I imagined; it was better. That game was so live, for a moment I thought I was at the club. Miami goes hard for their team.

I was amazed at the whole presentation. It was very entertaining. Watching a game on TV and being at one are two very different experiences. The Miami Heat has one of the craziest introductions ever. The lights got dim, the music started thumping- doom, doom, doom, doom, doooom- and as each player was announced, these big fire torches went off. I was seated in the 300 level and I could still feel that heat! Caught me off guard!

The fans are very much involved in this sport. It just so happened to be Fan Appreciation Night so there were lots of giveaways. I don’t even know how the players could focus with all of the commotion; the music, bright lights, booing and or cheering from the crowd. I have to give them their props. I found the announcer to be especially funny. Whenever Miami would score he was extra hype but as soon as the opposing team scored he was all monotone like the guy from the Clear Eyes commercial. Too funny! 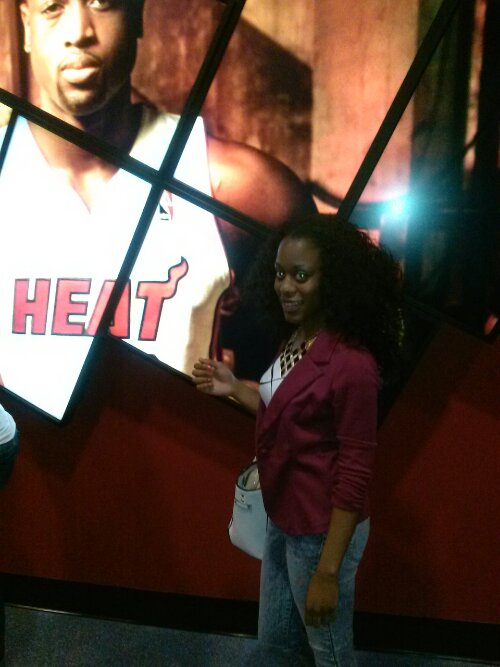 (Me and the homie D.Wade lol)

It was a great game. In the end, the Sixers won and being a Phialdelphia native myself, I was proud of those guys. Who knows, maybe we brought them some good luck from back home. And maybe, just maybe I’ve found my niche 🙂

Graduate Student. Fashionista. Blogger. A Black Girl About Town is a fashion-forward 20-something who dresses to the nines! Her friends flock to for details on the best places to eat, shop, dance and dine. She enjoys going places and sharing the details with you!
XOXO,
A Black Girl About Town!

One reply on “If You Can’t Take The Heat…”